After demonetization: India’s move to a “less-cash” society

India is on the path to becoming a digital payments economy

April 12, 2017 - “Cashless” societies have been mostly an academic pursuit up until now. However, more and more countries are taking exploratory steps in that direction today—and India took perhaps the biggest step yet last November with a banknote ban that reduced 87 percent of currency1 in circulation in less than two months. India’s “less-cash” economy is making progress in consumer adoption of digital payments, but there is still a long road ahead.

The broader reform agenda was put in place to reduce the shadow economy2 in India, expand the number of individuals with bank accounts, make the economy and government more efficient and build a modern payments infrastructure. Ultimately, the agenda could be a success if the economy overcomes the temporary shock of the reforms and Indians are able to shift their purchasing behavior.

To follow the development of India’s digital payments industry, Visa has introduced the India Demonetization Monitor, a quarterly publication, and created a new composite index, the India Digital Payments Tracker.

Visa’s India Digital Payments Tracker draws on the power of one of the world’s largest payments networks to provide a real-time window into how India is progressing on the path to a digital payments economy. The tracker is a weighted average of key industry and economic indicators:

With cash taken out of the economy, India has expanded digital payments in a relatively short period. As cash returns to circulation, some slippage is occurring and may continue over the short term. However, the ongoing infrastructure build-out should help India to continue making progress in coming years to join the more advanced group of economies where digital payments form a more significant share of commerce. 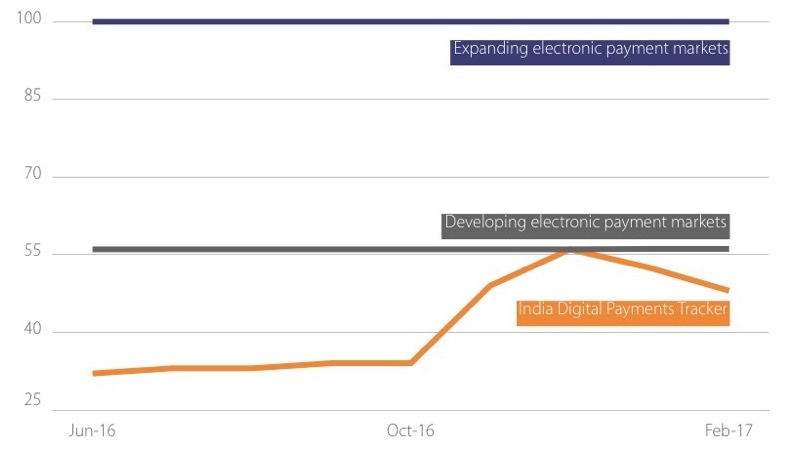 The tracker consists of a weighted average of the five key indicators, with greater weight placed on the monetary variables as changes in cash usage and deposits are the starting point for digital payments adoption. Before averaging, each of indicators was first indexed to 100, with 100 representing the average value of each indicator for a set of countries further along the process of payment digitalization (“expanding electronic payment markets”) in 2015.  For ease of comparison, we have also included a reference point where countries more similar to India in terms of their digital payment uptake in 2015 were (“developing electronic payment markets”).

The index relies on aggregated, depersonalized transaction data and is not reflective of Visa’s operational and/or financial performance in India.

1Reserve Bank of India
2A shadow economy includes illegal activities and unreported income from the production of legal goods and services, either from monetary or barter transactions.

Please contact your Visa Representative to find out more how we can help or send us an email.
Email us